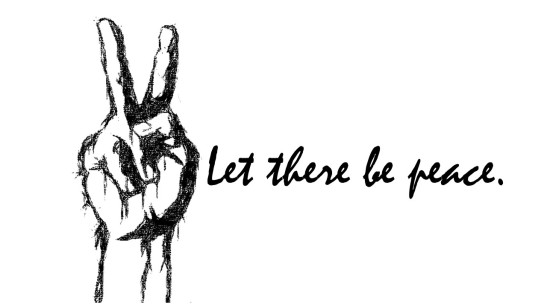 Let there be peace. This is my solemn prayer.  That we need not die or assassinate each other’s character to experience it.  I don’t just want to rest in peace but to live in peace.

But, it is hard to find peace and quiet these days. It is an unlikely combination.  Albert Einstein said, “Peace is not merely the absence of war but the presence of justice, of law, of order— in short government.” Maybe this is why the American Empire keeps up a racket.  Its politicians make a fuss.

Old arguments rile us up and kick up dust. The breaking news is breaking us.  Another day, another insult, another mass shooting, another natural or human- made disaster, another scandal, another threat, another investigation.  Life has been reduced to litigation.

Our lives are littered with disputes. Who will clean this up?  As we dumpster dive into people’s lives, sifting through trashy details for treasures, for trophies, for the win in yet another argument.  But Jesus said that for all we might gain, we lose.  He challenges our capitalistic conclusions: “For what will it profit them to gain the whole world and forfeit their life[i],” “and lose their soul”?[ii]

We pick fights and then pick at the fights. America is one big sore spot, made worse by the backbiting, the gas lighting.  Hair is on fire while trying to tread lightly.  We walk on egg shells.  It is not safe for anyone to carry the truth of our pain, our sadness, our doubts.

Instead, we cry, “Peace, peace.”   Still, the weight of reality is crushing us, bearing down on us, smashing our faces against the window, weighting us down in our pews.  We hold our tongues and consequently, can’t move.

But, my elders would say, “Tell the truth and shame the devil.”

Because lies don’t really serve us; instead, they do the devil’s bidding. They are his children.  Lies are the adversary’s “native tongue.”[iv]  No believer should be fluent in this language.

At least that is what Jesus said to those in the temple, “He (that is the devil) was a murderer from the beginning and does not stand in the truth, because there is no truth in him. When he lies, he speaks according to his own nature, for he is a liar and the father of lies.  But because I tell the truth, you do not believe me.”[v]

Regrettably, not much has changed from his time until now. Rather than hear the ugly truth, we pick up stones.  Shooing away “our better angels,” we let the devil come along.  “Deceiving and being deceived,”[vi] we think peace will come after just one more lie.

We say, “That’s not true. We’re okay.  Everything’s fine.”  With pieces of the sky in our hair, we tell each other, “There’s nothing to see here.  Please go back inside.  Go back to business as usual.  Peace, peace.”

Prophet- preachers find themselves in a familiar tough spot. Walter Brueggeman said there are three urgent prophetic tasks: to assert reality, that is truth- telling, to give voice to grief in spite of our denials and to proclaim hope less we fall into despair.[vii] Jeremiah warned us not to cry, “Peace, peace when there is no peace.”[viii]  Still, there are those who want us to fake it until we make it to heaven, to nod and smile, to go along to get along, to keep everyone comfortable, to maintain the status quo and to not get out of the boat.  But, “the rain drops keep falling on (our) heads.”

Malcolm Muggeridge teaches us, “People do not believe lies because they have to but because they want to.” They need to keep the argument going, keep the power of truth bogged down in tedious and unnecessary paperwork.  Friedrich Nietzsche was right, “The most common lie is that which one lies to himself; lying to others is relatively an exception.” Yet, the psalmist makes none but cried, “I kept my faith, even when I said, ‘I am greatly afflicted.’  I said in my consternation, ‘Everyone is a liar.’”[ix]

Which is why it is essential that we know Jesus. Jesus said that if we know him, we know freedom.  He said, “… you will know the truth and the truth will make you free.”[x]  How then are we so confined, so short of breath, so short- tempered?  Why do we seem unable to take another step—even if it is in the direction of understanding?  It is due to the growing anxiety in our world as the lies are piled on top of us.  Because as the saying goes, “If at first you’re not believed, lie, lie again.”

Still, it is hard to keep the world at arm’s length when it is constantly trying to pull you in, draw you in, bring you into the fight. It tells one lie, one half- truth at a time.  It offers illusions at half price and sells wholesale deceptions.  “Truth is whatever you want it to be,” they say.  But, as believers, we cannot make peace with that.

And I cannot make sense of that; still, there is a blessing in making peace no matter what becomes of us. Jesus said, “Blessed are the peacemakers.”[xi]  I receive his blessing and offer it to you.

[iii] That is, Donald Trump