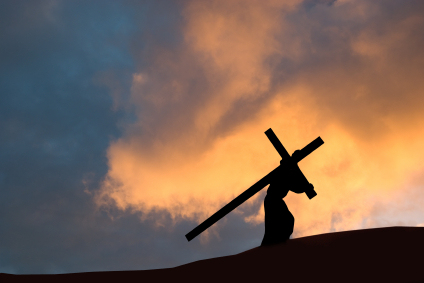 “Then Jesus told his disciples, ‘If any want to become my followers, let them deny themselves and take up their cross and follow me.  For those who want to save their life will lose it, and those who lose their life for my sake will find it.  For what will it profit them if they gain the whole world but forfeit their life?  Or what will they give in return for their life?’”

During this holy season of Lent, we are on a journey of lasts— last meal, last steps, last breath of Jesus the Christ.  We read and are bound by his last will and New Testament.   His words are written in red; following him is a death sentence.  We are following a dead man walking.  Stay with him.  Jesus is going somewhere and it is going to bless you.[1]

Followers not to be confused with fans as Jesus and his disciples are not the latest boy band.  Save your screams and your reach to touch his hand.  Healing in his garment’s hem, Jesus is deliverer from head to toe.  Still, he moves without a red carpet and travels without a security detail—well, except for Peter who always keeps a sword.

Soren Kierkegaard makes the distinction between followers and admirers saying,

“The admirer never makes any true sacrifices.  He always plays it safe.  Though in word, he is inexhaustible about how highly he prizes Christ, he renounces nothing, will not reconstruct his life, and will not let his life express what it is he supposedly admires.”[2]

With a towel in hand, the admirer is a watered- down version of a disciple.  Kierkegaard calls the admirer “a cheaper edition of follower.”[3]

The admirers are the fly by night, Nicodemus type.  They don’t want to suffer or have to stand by him when things don’t turn out right.  They want Christ at the lowest possible price, that is no sacrifice.  They don’t want to pack light, to carry a cross and wave goodbye to the world as they know it and themselves as they have been known.

They don’t want to live or die like Jesus.  They don’t want to be like him; they just like him.  They turn his words into mantras and Jesus becomes a motivational speaker.  He makes our lives better but we don’t talk about how. We avoid talking about his death.  So, we celebrate his life and say nothing about the night that everything was taken away from him.

Morbid, we change him into someone more palatable than the two common thieves he is hung between.  The good news but a sad story, we turn it into something more profitable, more capitalistic, more prosperity- driven. Today’s disciples say, “I’m too blessed to be stressed” while Jesus groans in the garden of Gethsemane, sweating it out and crying out to God.  His disciples are squeezing in a power nap and Jesus is questioning his purpose on earth.  It’s a toss- up, a tug-o- war: My will or Yours?

We clean Jesus up; we clean his blood up.  His cross makes such a mess of things and our capitalistic dreams.  Craig Hills reminds us in his book Servant of All, “Status is not a gift of the Spirit.  Ambition is absent from lists of spiritual fruit in the New Testament.”[4]  Bishop William Willimon says, “Status, honor and the drive to get ahead would be a worthy human endeavor if it were not for Jesus.”[5]  Keeping up with the Jones’ and the Kardashians or Jesus, it just doesn’t add up.

More than two thousand years later, we still have not caught up to him.  We are too busy climbing, clawing our way to the top instead of digging in our heels with those who are at the bottom.  We are so determined to win that we are stabbing each other in the back.  Disciples are not supposed to get ahead of each other; instead, we fall in line behind Christ.  Christians still haven’t realized that the Church was not created to get ahead in the world.

No, we are called to go under, underground and “to turn the world upside down” (Acts 17.6).

God down below, Jesus is the lowest of the low.  No rung, he is hung from a tree.  This is what it means to go higher with Christ.  And “he will not come down.”[6]

Eugene Peterson writes in The Jesus Way: a conversation on the ways that Jesus is the way, “To follow Jesus means that we can’t separate what Jesus is saying from what Jesus is doing and the way that he is doing it.  To follow Jesus is as much, or maybe even more, about feet as it is about ears and eyes.”[7]  Yes, to sit at his feet is to stand before his cross.

Caesar and the crowd think that they have gotten the last laugh.  Beat half to death and a public humiliation to boot, no one will follow him here.  We would have to thumb a ride to Calvary.  Get in but most are passing by it.  Go to church; they’ll try to get you close to it.  But they aren’t traveling up that lonely road.

There is no traffic; there are no traffic signs there.  You can get to the cross in no time.  You won’t bump into many people no matter the time of day. Because no one is in a hurry to die with him.

Nobody is going Jesus’ way.[8]

[1] It is a play on long- winded preachers who encourage congregants to keep listening by saying, “Stay with me.  I’m going somewhere and it’s going to bless you.”

[6] This is a song lyric taken from the song “He Decided to Die (He would not come down from the cross).”

[8] “Going Jesus’ way” is a meditation I wrote for the staff of the D.C. Baptist Convention and then shared during chapel on Wednesday, March 10, 2020.  I have decided to make it a part of this sermon as it is the Lenten season and the text selected is one wherein Jesus is on his way.