Trayvon Martin. I can’t seem to stop thinking about him and neither can millions of people across the United States and around the world.  The President of the United States of America said, “If I had a son, he would look like Trayvon Martin,” the members of the Miami Heat, Marian Wright Edelman of the Children’s Defense Fund and students from numerous colleges and universities have all posed in hoodies. There have been demonstrations throughout the city of Washington, in Sanford, Florida, New York City and others. Dr. Michael Eric Dyson appeared on “The Ed Show” on MSNBC where he discussed the criminality of socially colored black skin and the training of African American children to be unnecessarily deferential to law enforcement in order to ensure that they are not harmed. He also mentioned the fact that European Americans wear hoodies every morning as they make their way to the gym, adding that the unabomber, Ted Kaczynski, was wearing a hoodie and lamented the unjustified and deadly use of force used by George Zimmerman against Trayvon Martin. But, that’s just it. Zimmerman was not a police officer; he was not even a member of the neighborhood watch that he appointed himself captain of.

I’ve never met Trayvon Martin but I know his voice because I listened to the 911 call that captures his screams, crying out for help but silenced after a single gunshot to the chest. Trayvon Martin was a child, Tracy Martin and Sybrina Fulton’s baby. He was doing what my siblings and I have done on countless occasions as children, walk to a corner store to buy candy. He had the right to walk down any street in America and that right was violated. He shouldn’t be dead. He should be brushing his teeth and getting ready for church in the morning.

I suppose that I am angry that no charges have been filed against Mr. Zimmerman and that he is free to walk down the same street that he shot Trayvon Martin on. But, the more I think about it, I believe that the reason why his name will not fade into the recesses of my mind is because of the rationale for the crime: clothing. He looked suspicious. He looked to be on drugs. Is this what the announcer would say of one strutting down the catwalk? “Our next model is wearing a sleek, trendy black hoodie that comes in an array of colors for all seasons. He’s wearing a hoodie, good for everyday wear and it will ensure that he always look like a criminal. If you want it to be assumed that you are a drug addict, then this is the attire for you.” Geraldo Rivera would agree, saying on Fox News that Trayvon Martin made himself a target by wearing the hooded sweatshirt. 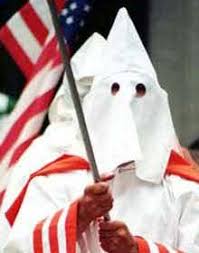 But the Ku Klux Klan wears hoods. They hold rallies, public demonstrations and even parades in many of America’s cities. No one is saying that they look suspicious, that they are up to something. No one connects their attire to their criminal past. No, they are free to walk where they choose because it is their right. Do they have more of a right than Trayvon Martin? It doesn’t matter if we agree with their positions. It doesn’t matter if we are offended by their attire. They are free to wear whatever they choose. To suggest that anyone can identify a potential criminal based solely on clothing is ridiculous, dangerous and in the case of Trayvon Martin, deadly. But, I guess it just depends on which persons and what actions we consider criminal.