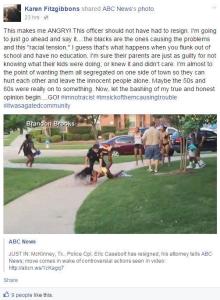 A recent Facebook posting by a fourth grade teacher in Texas or maybe I should say former teacher of Friendship Independent School District has set off a firestorm.  Karen Fitzbiggons has said more than a mouthful in response to yet another example of police misconduct.  This time it was in McKinney, Texas at a pool party.  Now, I’ve heard it said that everything is bigger in Texas but in this case, her words should not have been said at all.

There are many lessons here.  I’ll just highlight a few:

(1) Think about the consequences of your words.  There is an African dictum that says, “Once a word leaves your mouth, it leaves your control.”  Fitzbiggons was thinking that she was in the 1950s or 60s when she posted these words.  Messages move just a tad bit quicker these days.

(2)  Don’t post a rant on social media and invite others to comment as if you are somehow entitled to your racist opinions of others.  It may cause you to be un-followed, un-liked and un-favorited by countless people who otherwise would not have known you existed.  You just became bigger than Texas.

(3)  Don’t use words or phrases like “the blacks,” “them” or “the innocent people.”  Don’t reference the 1950s and 60s in conjunction with your desire for the return of segregation.  The two don’t go well together and it wasn’t a good experience for African Americans.  I’m guessing you don’t teach that in fourth grade.

(4)  Hash tags like “#imnotracist” are not real or credible witnesses to your character.

If you haven’t heard about it or read her words, here they are, complete with sarcasm:

“This makes me ANGRY! This officer should not have to resign. I’m going to just go ahead and say it…the blacks are the ones causing the problems and this “racial tension.” I guess that’s what happens when you flunk out of school and have no education. I’m sure their parents are just as guilty for not knowing what their kids were doing; or knew it and didn’t care. I’m almost to the point of wanting them all segregated on one side of town so they can hurt each other and leave the innocent people alone. Maybe the 50s and 60s were really on to something. Now, let the bashing of my true and honest opinion begin…GO! #imnotracist #imsickofthemcausingtrouble #itwasagatedcommunity”

One thought on “Karen Fitzgibbons: A blast from the past”