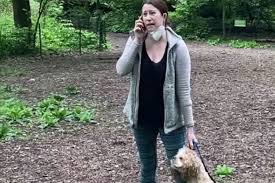 “I’m sorry.  I’m in the Ramble and there is a man, African American. He has a bicycle helmet; he is recording me and threatening me and my dog. …

There is an African American man.  I am in Central Park.  He is recording me and threatening myself and my dog. …

I’m sorry.  I can’t hear you.  I am being threatened by a man in the Ramble!  Please send the cops immediately!”

This is what Amy Cooper said but this is not what Christian Cooper was doing.  Though they share the same last name, they are unrelated. But millions of African Americans made the historical connection as this is not the first time that an African American has been falsely accused of attacking a European American woman.  It goes back centuries and is rooted in the puritanical view of socially colored white women, as physically and morally pure.

African American men were routinely accused of rape and without due process, lynched.  Even the thought gave rise to lynch mobs in the South.  “Stories of sexual assault, insatiable black rapists, tender white virgins and manhunts led by ‘determined men’ that culminated in lynchings were the bodice rippers of their day…” writes Philip Dray in At the Hands of Persons Unknown: The Lynching of Black America.  African Americans were treated as public enemies.

She asked him to stop recording her and she walked toward him.  He asked her not to come close to him and thankfully, keeps recording.  Her response, “I’m going to calling the cops.” Christian replies, “Please call the cops.”

She responds, “I am going to tell them there is an African American man threatening my life.”  And that changes the exchange altogether.  She tells a lie and it is not a little white one.  It is calculated, intentional and historical.

With the history and present- day reality of police brutality, Amy is threatening Christian’s life.  With the weight of white privilege, the narrative of white power and the prejudicial interpretation of their encounter, she dials 9-1-1.  Because his presence in the park could only mean one thing.  They will believe that she is being attacked, that he is out to get her, that she needs to be saved from harm.

She pretends to be a damsel in distress, raising her voice in a feigned panic, which makes the video all the more sickening to watch.  She has since lost her job and her dog, who she is choking during her exchange with Christian.  Amy has offered an apology and Christian has asked that persons not threaten her life.  But, I hope that Amy has learned another important lesson, that 9-1-1 is not a joke.

Calling the police when there is not an emergency and in effect, filing a false police report that could have cost another human being their life has cost her to lose her livelihood.