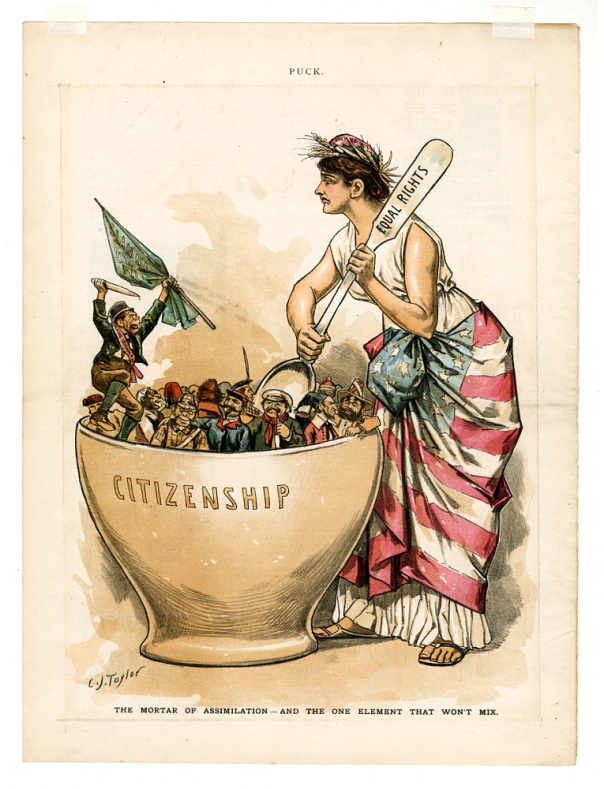 Recently, journalist Tom Brokaw was called out on comments he made on Meet the Press where he suggested that Hispanics were not doing enough to assimilate.  He has since apologized but the conversations continue online, on buses and in taxis, at barbershops and salons, in breakrooms and over dinner as to what he meant and more specifically, what it means to be American.  To be sure, I am glad that he said it out loud.  Rather than pretend or tolerate persons from other cultures, give voice to your fears and the secret checklist that you only take out in with friends and family.

Because you can’t exactly take back that some persons are struggling with whether or not they  “want brown grandbabies.”  As ignorant as it is insulting, it is a racist belief that human beings who are not socially colored white should be treated as unwelcomed and rejected upon sight, that we know all there is to know about the baby boy or girl based on the social coloring of skin.  Most people are descent enough not to call a baby unattractive but to outright reject the possibility of the child, to abort the idea of a little one because they are a member of a culture that others have deemed inferior is heartless.  Persons who espouse this belief are pre-hating, pre- stereotyping, pre- segregating their families.  Before it even happens, they are drawing lines around their hearts and their homes with their tongues.

This is who my family is and who we always will be.  All others: Do not enter.  Keep off the grass.

We want persons to become American, to become one of us but how much of themselves must they give up?  Deny?  Reject?  Why can’t they keep their heritage, their culture, their language, their name?  Why do they have to lose themselves altogether?  Who has the recipe?  The measuring cups?  Are we eyeing the amount or is it exact?

When I was a child, I was told that America was a melting pot.  If this were the case, then how is it that the flavors of all the cultures that have entered are not reflected?  That persons after jumping into the pot are still being told to “go back to where you came from”?  This makes me wonder who is in charge of the ingredients?  Who is the taste tester and who is this dish being served to?

Who are we becoming as Americans and who says that we are what our founders and fellow Americans intended?  Who has the right to say that someone is “un-American” and where do these meanings come from?  Frankly, I would like to see the checklist.  I want persons to come to the table and say how they really feel about “brown grandbabies”– because they are not coming but already here.  They are in the so- called melting pot, whether or not you want them to touch you, to rub off on you, to be associated or affiliated or closer still, related to you or not.

I am convinced that we are making a myth, that what is in the pot is a false hero narrative of the founding of this country and of a people who pulled themselves up by their bootstraps versus those who choked the life and culture out of people who are indigenous to what is now the United States (Sadly, the names of the people have been snuffed out.) and who tied a rope around Africans to enslave them, to lynch them and then to limit them through segregation and the Black Codes that continue even today.

We have to talk about it; if not, comments like Brokaw’s will merely stir the pot.